Some friends are over for lunch today. I made these tender pepper beef and pickled carrot wraps with a Vietnamese style dipping sauce. The wraps are crunchy,  juicy & satisfying.   Best of all, so very easy to make.

If you have a spice collector like me, you may have turmeric & cumin in your pantry. I also keep ginger pieces and chilies in my freezer. With a onion, this prawn dish is 5 minutes away … no recipe required.

Clean 12 prawns; dice the onion, slice 1 chili, mince a little ginger (optional); heat up a frying pan with some cooking oil; add the onion, ginger & chili; stir fry until onion  is coated with oil; add turmeric & cumin (I use about 1tsp each for a mild taste); stir for the spices to coat the onion; push the onion to the side; add prawns, 1-2 minutes each side until cooked through; stir through the onion; season with salt.

I serve this with an Indian inspired chickpea & bacon stew.

My hubby & I always debate about natural oysters vs. cooked oysters. I love my oysters lightly steamed (30 seconds to 1 minute on hot steam), topped with sliced shallot^, coriander, chilies, white wine, soy sauce* and sesame oil;  then finish with a hot splash of cooking oil on top of the herbs to bring out the flavors & freshness. It is so simple and delicious, no recipe required. 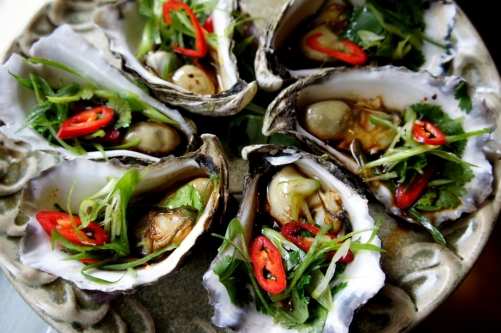 A long day at the office, tired, hungry & craving for a quick meal. The local food store had a few packs of chicken sausages, and I made potatoes and spinach as a side dish – tasty & satisfying! The star of the dish was, of course, the potatoes with cumin & turmeric. 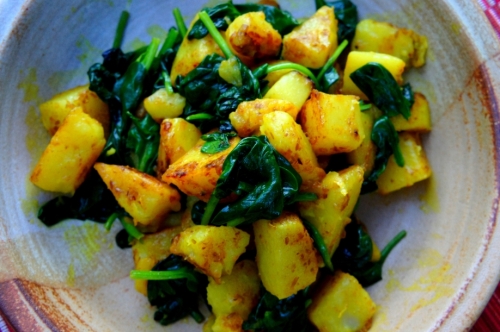 No recipe required for this dish, here are a few simple steps:

END_OF_DOCUMENT_TOKEN_TO_BE_REPLACED

To share with a few friends –  this recipe makes 2 rolls, which can be cut into 4 pieces each.

Here are the easy steps: END_OF_DOCUMENT_TOKEN_TO_BE_REPLACED

Have you ever try a one-pot meal using a rice cooker?  A rice cooker often comes with a plastic steamer – it is handy when you want a quick & easy meal. 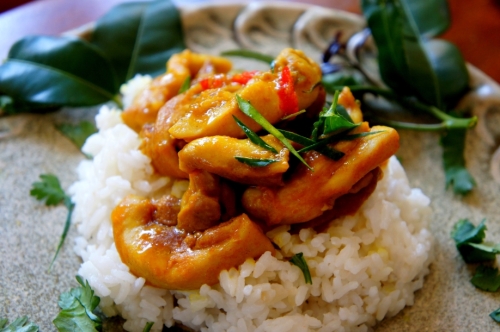 Here are the simple steps: END_OF_DOCUMENT_TOKEN_TO_BE_REPLACED

Clams with XO sauce, and the life story of my uncle from TaiShan 台山

These lovely New Zealand clams reminded me my first clam experience, a dish made by my uncle’s family from the countryside of TaiShan, GuangDong province in China. 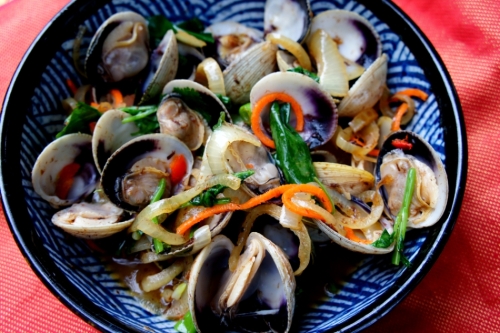 My mother and her brother were children of a concubine who married an elderly man returned to China after years of hard laboring in Malaysia. During the second sino-Japanese war, both parents died as the family ran out of money. For some reasons unexplained to me, the family offended some important locals with considerable power. My uncle, at the age of about 7, was sent to prison as a Japanese traitor. When he was released, he was so weak & sick that he was carried out.  He was never the same again.

During one school holiday I was sent to stay with TaiShan uncle and his family in the village. My uncle was a man with very few words, not smart, worked a lot, and always smiling.  He was very skinny and looked sickly. With money sent by another uncle from Singapore, he was able to get married. He married a kind, strong, capable and hardworking woman and they had 3 children. As rice farmers, they did not have sufficient rice for me to eat. So I brought them food stamps, some money and some old clothes which they treasured.

The eldest boy, Zhong, who was a few years younger than me, was responsible for providing ingredients for lunches and dinners. Some days we went to the rice field with some threads & small potato pieces – we fished out frogs from the water. Some days, we went to the creek, searched through mud to find tiny little clams. The frogs were small and we chewed the bones as well as whatever little meat on it. The clams, half of a bowl to share among us, was so very delicious and moreish.  I still remember the satisfied looks on the children’s faces at the end of each meal. They never complained about wanting anymore or anything else.

When economy improved in the 80s, the rice field was sold to make way for factories. There was no more farming to be done. My uncle figured out that if he collected soft drink tins and bottles, he could sell them for money to buy snacks. Reportedly, he was the happiest soft drink bottle collector around town.

I felt happy and sad when I cooked & enjoyed this delicious New Zealand clam dish with XO sauce.

Cooking method is as follows:

END_OF_DOCUMENT_TOKEN_TO_BE_REPLACED

On most Fridays I work from home. Some days there seems to be so much happening that I barely have time to make lunch. This is one of my Friday 10 minute meal – it is delicious and recharges me on cold winter days. No recipe required. 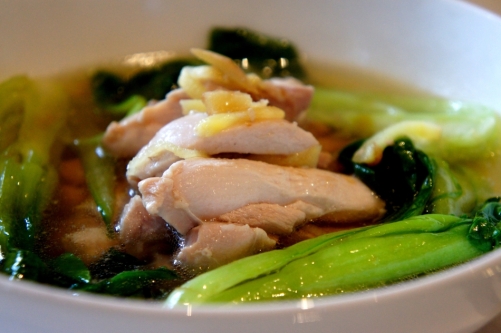 I boil some water in the kettle while I thinly slice 2 chicken tight fillets, wash & slice some bok choy,  and slice up some ginger; Then I  heat up a little cooking oil in a pot, pan fry the ginger slightly, then fill the pot up with 2 cups of water and the chicken pieces; bring the water to boil, add the bok choy, bring it to boil again; check if the chicken is cooked through; and lunch is served with a pinch of salt and pepper.  If you like, you can add a dash of oyster sauce.

So simple and heart warming – the ginger brings out so much flavor.

This is one of my childhood favorite – a dish that can be cooked in 10 minutes. It is sweet, sour, juicy and tender. Best of all, no recipe required. Simply cut 2 tomatoes into pieces;heat up some cooking oil in a frying pan, lightly scramble the 2 eggs; add tomato pieces, oyster sauce, a little sugar, stir well; cook with lid closed for 5 minutes and its is ready to serve. 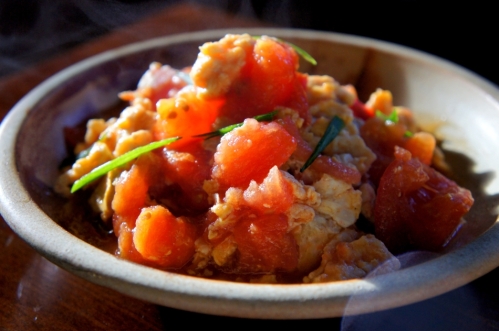 Something was always plenty in Southern China where I grew up – rain, rain and rain. And not surprisingly, watercress was always fresh and cheap. My grandmother loved to cook watercress broth – she boiled the vegetables for hours with lots of pork bones.

Here is my version of a refreshing watercress broth – no recipe required.

1-1.5kg of pork bones, a quick boil to clean them up; then put the bones in a pressure cooker with the stems of a bundle of the watercress (need to be washed thoroughly, reserve the green tops), 1-2 cut-up carrots and 2 dried dates (skip the dates for a FODMAP friendly option). If you like, a few pieces of dried lotus root (skip for a FODMAP friendly option) –  cook for 15-20 minutes on high pressure – and the broth is done. Season with some salt and pepper.

If you like to be an old fashion Chinese for once – chew the meat off bones, it is delicious.

For Chinese cooking, pork belly is arguably one of the most popular cut of pork – it is juicy, full of flavor and mouthwatering fatty. It can be stir fried, steamed, boiled, braised, preserved/dried & roast. This pork belly dish was originated from a traditional dish called  ‘red braised pork’. It so happened that I have a jar of spicy bamboo shoots in the pantry. Bamboo shoots go so well with pork and  I added a few table spoonfuls to the pork belly. 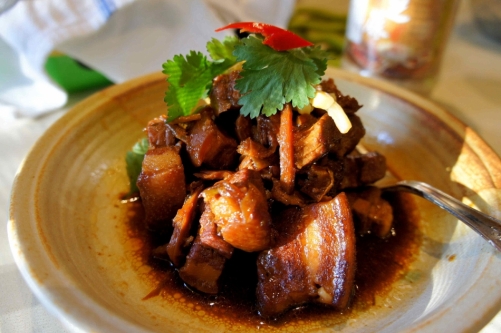