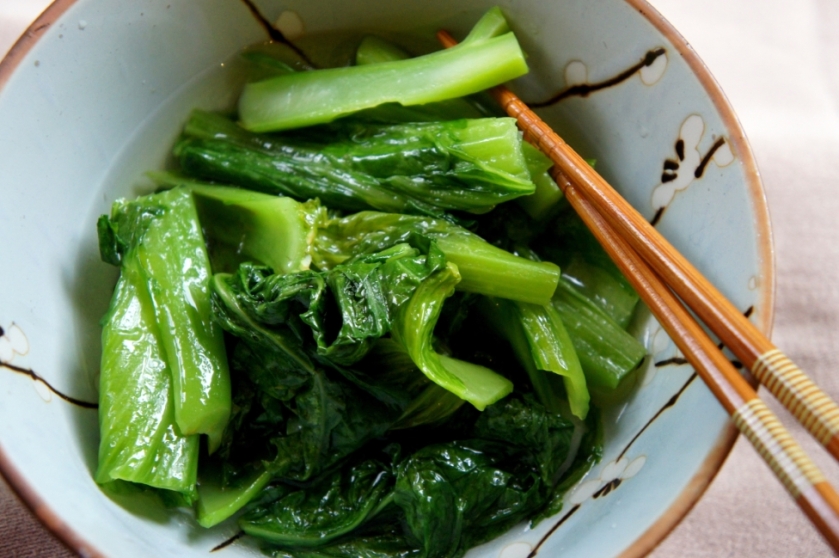 Sometimes, I boil some Asian greens with a dash of cooking oil and a little salt. I eat the vegetables and drink the water that was used for boiling the veggies as a ‘soup’.  I can drink many bowls of this ‘soup’. It is strangely comforting. It brings back the memories of my GuangDong GuangYa Middle School years.

GuangDong GuangYa Middle School was one of the highly selective schools in the city of GuangZhou. Although the school was located in one of the most populated cities in Southern China, it was established in the 1880s and built on an unusually large block of land with gardens, traditional style buildings and sports grounds. While we were not able to escape from the common poverty and a rigid  educational system which we were to memorize pretty much everything, we learned to be self-discipline and responsible for our own destiny.

During my junior years when I was still living at home, the best time during a school day was the lunch time. When bell rang at 1pm we ran for the canteen. There were 4 tiny little windows at the front of the canteen where we collected our meals with prepaid vouchers. A typical meal was 2 cups of boiled rice, a few pieces of thinly sliced pork cooked with Asian greens, cucumbers or melons. The meals were pale looking, probably only seasoned with salt and nothing else. The vegetables were  over cooked, floppy and watery.  From time to time there were huge canisters in front of the canteen and we could scoop ourselves some ‘soup’ – the water used to boil the vegetables.  A few times a year before the major exams, we received special bonus called ‘Jia Chai’ 加菜 which was a little extra food.

When I started boarding during the senior years, I shared a rundown dormitory room with some 40 other girls. The room was large, with high ceiling and always full of dust. There were no cleaning staffs, the girls took turns to sweep the bare concrete floor each day. One end of the room was used as a drying area with rows of newly washed clothes dripping water onto the floor below. The external shower rooms  were bare with only cold water taps, no individual doors and very limited lighting. During winter time we could pay 2 cents to buy a bucket of hot water from the canteen and carried it all the way to the shower rooms for a warm splash, or to brave it with a cold shower.

The kids at the school were all very bright. They were expected to go to university. This meant 10-12 hours of study each day. Those days, going to university  would mean a guaranteed government job for life and the selection exams were very competitive. Boarding was compulsory during the senior years. There were strict routines –  getting up at 6am, compulsory exercise, breakfast,  a morning self-directed study session,  followed by 5 formal classes, lunch, nap time, 2 more study sessions in the afternoon, followed by exercise, shower time & dinner time, then evening more self-directed study in the classroom till 30 minutes before bed time. Lights were turned off at 10pm.

Despite the handwork and poor living conditions, I found friendship and kindness. Guangya contributed greatly to who I am today. For that, I am very thankful.