Homemade wheat noodles in soup, memories of a peasant family at a noodle shop 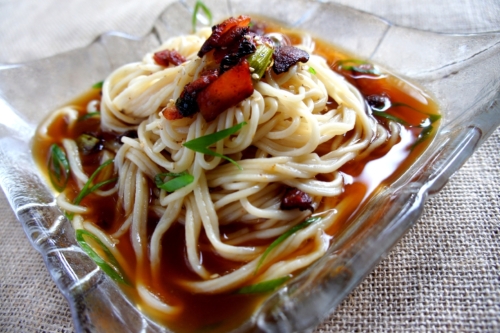 A few evenings ago, I watched Behind the News with my 9 year old boy on ABC iview. Behind the News is a TV news program made for the kids. That evening, the program covered the famine situation in Sudan.  “Had China ever have famine?”my little boy asked. These few innocent words had brought back my memories of a peasant family begging at a cheap noodle restaurant. I could still see their shadows, even today.

In early 70’s, my grandmother cooked communal dinners for the extended families. Each family contributed to the cost of the food. Money and resources were limited at the time. We nearly never went out for dinners, as my mother didn’t want to pay for meals twice. One night, for whatever reasons we were at this cheap noodle restaurant. It was a common and shabby place. The kitchen inside was steamy with a large pot of hot water for cooking the noodles, a large pot of cold water to cool and rinse the noodles, and a large pot of soup with nothing in it and barely any color. We found a table outside with wobbly chairs and started to eat our noodle soups. For a few cents, the meal had no meat or vegetables, just plain noodles and a little green shallot floating on top. It was hot and a rare treat for a little 5-year old girl.

Suddenly, 3 children in ragged clothes surrounded our table. They looked different to our city people. They had dark and coarse skin, as they were farmers from the countryside. They were dirty and messy, as they were far away from home and living on streets. They spoke in dialect that I never heard before. They would have traveled from afar, probably from another province where their crops failed. And their eyes, they had such hungry eyes. The littlest one just devoured some leftover soup from the next table, and redirected his attention to my bowl.

I looked up to my mother. ‘Eat up all your food’, she said sternly. When I left some food in the bowl at the end of the meal, she picked up the bowl and swallowed everything in it, including last drops of the soup, the soup of nothingness. The children moved away to another table, motionless.

Many years past, my memories of that family did not fake. Most of all, I was puzzled why my mother was so indifferent to the begging children.  After all, she was an orphan herself. She would have understood the pain and suffering of that family, hungry, homeless and desperate?

This weekend, I made a large batch of noodles from scratch. I served the noodles in a beautiful chicken soup, topped with mouthwatering crispy bacon bits. Life has been kind to our family and we really appreciate what we have.

Like to have a go at making your own noodles?  Recipe is as follows.

I used a pasty machine – simply roll out the dough and put it through the pasta machine, first as a flat sheet, then as noodles; when making the noodles, add some cooking oil to the machine as you go, so the noodles won’t stick together. 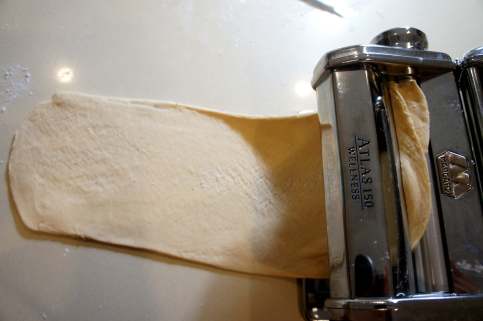 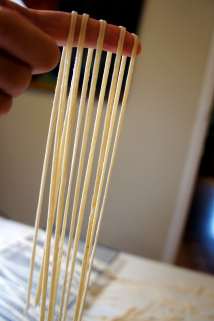 In batches – bring a large pot of water to boil; drop the fresh noodles in the hot water; cook for a minute or so, stir occasionally; take out the noodles gently and rinse under the tap using a colander; drain off the liquid, add sesame oil and combine gently so the noodles won’t stick together. 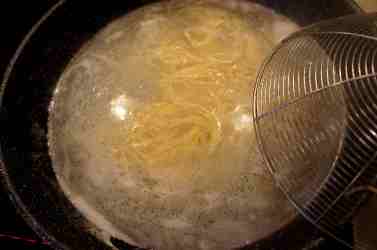 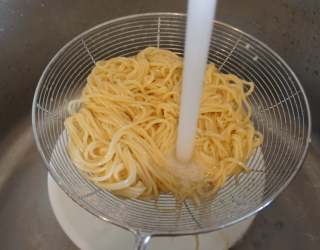 Once cooked, take out all the solids and dispose (except for the Chinese mushrooms, you may like to keep them); filter the broth with a fine sieve; skim all the fat from the broth.

Bring the broth to a gentle boil; add seasonings.

Mix the bacon with the green shallot; grill the bacon bits under a hot grill until crispy; use a kitchen towel to soak up the fat as you go, otherwise the bacon may not be crispy.

Assemble the noodle soup with some noodles, some soup, crispy bacon bits on top, and garnish with green shallot and sesame seeds.